A lot of people looking for hosting for Prestashop wonder how many unique users (UU) can be handled by shared hosting. Of course, it depends on both sides: good and efficient hosting and good store optimization. Both of these things combined will make it possible to achieve the effect described below. The information is not sponsored, everything we describe below is true and the whole situation was not inspired by us – the article was created only because the client sent us a summary of the effects of his advertising campaign.

Preparing for a large advertising campaign for PrestaShop store

Some time ago, one of our clients reported to us that he was preparing for a larger advertising campaign and he was expecting a slightly increased website traffic in the near future. The client was prepared for this in such a way that he asked us to buy 3 additional processor cores and 20 additional server processes to the standard hosting package. The client had in the package (premium-ssd-www) :

after expanding the package, he has:

After changes made in the package, nothing happened for a long time…

Effects of a large advertising campaign – hosting efficiency and PrestaShop

We didn’t monitor what the client was doing. Because we don’t review what customers do on their hosting accounts. We also didn’t notice any anomalies in the server’s operation.

And suddenly, one day, probably about 2 months after previous changes to the hosting account, we received an email from the client saying:

“I’m sending you statistics on how your servers coped with website traffic. I remember that you were interested in what traffic will eventually be able to withstand.”

The customer sent us a screen from Google Analytics with the number of active people online on the site.

The customer also wrote: “Here’s the largest online traffic that I was able to capture on the screen, but I saw that it reached 900”

What system does the customer use? With over 828 users simultaneously on the site (and Google Analytics, however, this shows quite reliably), at first we thought that the customer has a rather static website. Turns out that we were wrong becauseat the end of the email the customer wrote:

“For the curiosity I will say that the whole works on PrestaShop 1.7 based on php 7.1“

We know that we have nice servers at Smarthost.pl, but nevertheless such numbers of people online on the website are really impressive – especially since it is a PrestaShop store – a site with a lot of dynamic content, because in shops not everything can be cached.

We don’t know exactly what PrestaShop optimizations the client used. But he proved that on shared hosting, using the premium-ssd-www package for 49 € net a year – PrestaShop can work efficiently. What if it was a LiteSpeed-based package with Redis? We leave such tests to our customers 😉

Check hosting performance for PrestaShop
– create a free account for 14 days of testing.
Keep in mind that we migrate sites to our servers free of charge. 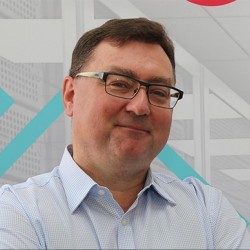 Wojciech Babicz
Wojciech has been dealing with hosting since 1996, initially on servers based on the FreeBSD system and later on Linux systems. In over a dozen years of building the hosting company from scratch, he met with many "industry" situations regarding: power supply, Internet connections, servers, routers, switches, software (system and client) and most importantly ... people.
In addition to being an internet geek, he is passionate about photography, cardboard modeling and traveling over Europe as well as over the whole world.